An extended trip with multiple sections from Fazeley Mill Marina down the Coventry and Oxford canals, to journey on the Thames and the Kennet & Avon Canal. The return trip was via the Grand Union and Birmingham.

The route and dates

The Map of the trip with stops and dates

Use map legend to view stops

Jean and Howard started off from Fazley along the Coventry canal. after a side trip up they Ashby canal they continued on the North and then South Oxford canals, through Braunston and Napton junctions.

Mary and Laurie picked the boat up on the Oxford Canal at Banbury and cruised south for a few days in Oxford.

Howard joined us in Oxford for our cruise up to Lechlade and then back to Oxford between the 15th and 24th of June.
Click the image here for the photos.

We carried on to Cookham and then back to Reading before Howard and Jean continued along the Kennet and Avon Canal.
Click the images here for the photos. 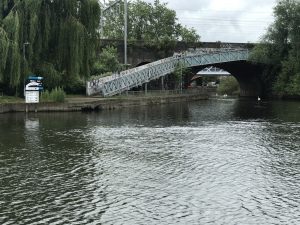 The Kennet and Avon canal entrance shown here is just below the useful Tesco moorings in Reading.

Bath and Devises on the K&A

Laurie, Mary, Alistair, Chris and Iona visited bath. Taking time out for wild water swimming and introducing Chris to navigating Lady’s smock through locks in bath. The deep lock in Bath is the second deepest (by just three inches) on the UK canal network.

Swimming at Bradford on Avon

Swimming at Bradford on Avon

The Lower Thames to Brentford

Howard, Jean, Laurie and Mary Cruised down the Thames from the 1st to the 9th of September. This included a splendid stop at Hampton court and a sunny afternoon cruise on tidal Thames from Teddington to Brentford. Our passage onto the Grand Union was eventful as the CRT had mislaid the record of our booking to go through Thameslock at Brentford.

Romney Lock 5th September, On You Marks – Get Set – Row.

Fullscreen
Longer videos for you to experience more of our trip.

Uxbridge to Gayton on the lower Grand Union canal

Having checked that they had no unfenced water children onboard, Laurie, Mary and friends Cruised Up the Grand Union between the 9th and the 22nd of September.

Longer videos for you to experience more of our trip.

Hanwell and Norwood Locks on the G.U. Fast

Hanwell and Norwood locks on the GU.