Howard found this from 2019 and shared it, it is quite fun. A taste of what we hope to get back to, though perhaps not quite this fast!

Well we planned to have Lady’s Smock repainted over the winter 2019-2020 but as we all know fate was not kind to the world, so it took a little longer than expected. Mary and Laurie moved the boat to Bourne boats at Park Gate Teddesley in November 2019, with painting scheduled for April 2020. Here is what she looked like then.

As it eventually turned out, she was out of the water and ready to go into the workshop in early July.

By the 8th of August the old paintwork had been blasted off and the first new coats applied, looking good. We had chosen to have two pack applied as it should be harder wearing in the long term.

We understand the windows were a nightmare, well done to Dan, Wayne and their team for doing a thorough job and removing the windows and doors to ensure any old rust could be found and removed.

This was not achieved without a fair amount of dust and grit, which was however cleaned up eventually.

The work was neatly done and the new solar panels look good. Dan managed to hide the wiring well and with solar panels near the front we can clear the clutter from the view ahead to make cruising easier.

It’s the details that matter, the new coach lines and bow flash designs are an improvement on the rather tired paintwork we had. As far as we know the boat had probably not been repainted much in her 18 years. Also take a closer look at the new Lady’s Smock artwork here.

Getting all the work finished did take little while but as has been commented before if we want to get things done at more than four miles an hour, why did we buy a boat in the first place?

We finally got on board on the 21st of October and bid Teddesley farewell. We managed get our trip back to Fazeley in just in time to avoid the second Covid-19 lockdown of the year, and before a planned canal stoppage on the 2nd November!

So we were back just in time to shut her down for the winter!

Our trip to Fazeley is documented here (with some more nice shots of the shiny new paintwork).

With a big thank you to Andy Russel and one of Howard and Jean’s friends, here is a quick look a the steps in the transformation from the tired old cabin side artwork to a brand new logo.

Updated Feb 2021 with new cushion artwork by our next ‘boat’ neighbours in the marina. 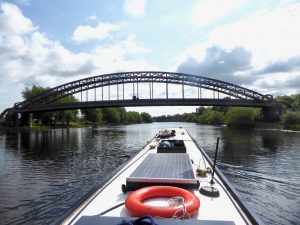 This trip hasn’t turned out as planned. With flooding on the Trent causing an about turn at Alrewas with flood levels meaning the flood gauge was submerged, followed by a reroute down via Knowle and Hatton locks only to hit a stoppage at Bascote locks. So we turned again and are returning to Fazeley via Birmingham.

We found a good mooring in Birmingham and sightseed for a day – we’d recommend the National Trust’s Back to Back cottages. Then we were joined briefly by Mary and Laurie for a quick trip down Farmer’s Bridge flight, mooring at Aston.

As I’ve been neglecting the Lady’s Smock site of late, I thought I’d share a time lapse video of ascending Hatton Flight today.

We averaged 7 minutes a lock over the 23 locks of the main 21 in the flight and 2 Cape locks.

Well, still a few changes to make to fix noisy doors, and touch up the paintwork, but we are already thinking of what we will see and which canals we will cruise this year.

Our Marina (one of a group of three) has been acquired by ABC leisure group, which gives us a choice of more marinas to moor at between trips.

I have prepared a map of the Marinas and the cruising distances between them:

Mooring up to 30 days by arrangement

We have another Helmsperson:
Mary passed her RYA Inland Waterways Helmsman course over two days of training on the 30th-31st of May 2018. Many thanks to Chris, our patient trainer from Willow Wren.

Lady’s Smock has been protected from the elements in a poly-tunnel and grit blasted in preparation for application of two-pack epoxy to the hull. This coating will protect the steel hull from the corrosive effects of canal water for a number of years and should last longer than the 2-3 years that can be achieved using currently available blacking products.

Looking forward to seeing Lady’s Smock tomorrow. Hopefully all the work being done to the inside has been completed. New bunks amidships, new bed at the front and two new wardrobes. New drawers and a new table. Updated battery management and monitoring. New DAB radio and lots of new DIN 12v and USB sockets.